The anti-casino lobby in Japan is concerned about a potential increase in the number of people suffering from gambling addiction when casinos become legal. (Photo by Yuichiro Takagi)

TOKYO — Foreign casino operators are salivating over the prospect of finally winning access to the world’s third-biggest economy. They estimate that the Japanese casino market could be worth 1.75 trillion yen ($15.8 billion) a year when resorts are opened in three cities, surpassing Nevada’s $11.1 billion.

Opponents have waged a decade-long campaign against legalizing casinos in a nation that already has 5 million addicts to pachinko, a form of vertical pinball slot machine. But Prime Minister Shinzo Abe has waved critics aside, his eye set on the tourism-boosting potential of so-called integrated resorts — developments featuring a casino along with hotels, other entertainment and conference facilities.

The bill that regulates the new industry was passed by a majority in the House of Representatives, the lower house, on Tuesday afternoon, amid continued hooting from opponents who declined to stand up to show approval. “There is no value for this bill to be rushed!” one member yelled during the vote.

After Tuesday’s historic vote, the bill has one final step before it becomes law — to gain approval in the upper house. However, the current session of the Diet ends on Wednesday, and the ruling coalition will have to seek an extension in order for the bill to be debated and approved by the chamber.

“Tourism is a pillar of Japan’s growth strategy,” the Japanese prime minister, who has been desperate to attract foreign investment to boost the economy, appealed at the Committee on Cabinet, the body to discuss the integrated resorts at the Diet, on June 1. “Integrated resorts will create new employment and culture, bolstering Japan’s international competitive power,” Abe said.

The ruling coalition, led by Abe’s Liberal Democratic Party, had to ram the bill through a lower house committee last Friday. The bill follows an initial bill legalizing gambling, which passed the Diet at the end of 2016.

Japan needed nearly 20 years for a draft bill to reach the floor of the Diet for discussion since a parliamentary working group on the issue was first formed because of strong public opposition. Polls by major media consistently show that more than 60% of the population disagrees with legalizing casinos.

“Politics without the people’s agreement will never succeed,” said Tomoko Abe, a member of the opposition Constitutional Democratic Party of Japan, who reproached the prime minister’s speech at the committee on June 1. Tetsuya Shiokawa, a legislator from the Communist Party, denounced the prime minister’s growth strategy, saying that “people do not accept moneymaking with casinos.”

The anti-casino lobby is worried about a potential increase in the number of people suffering from gambling addiction when casinos are legalized. The scale of the problem is highlighted by research showing that already up to 5 million Japanese are addicted to pachinko, which is not officially considered gambling since its machines do not pay cash prizes.

However, Abe’s aim of using casino tourism to boost the sluggish Japanese economy chimes with the objectives of the global casino giants, which have been lobbying for the opening of the Japanese market for more than a decade. 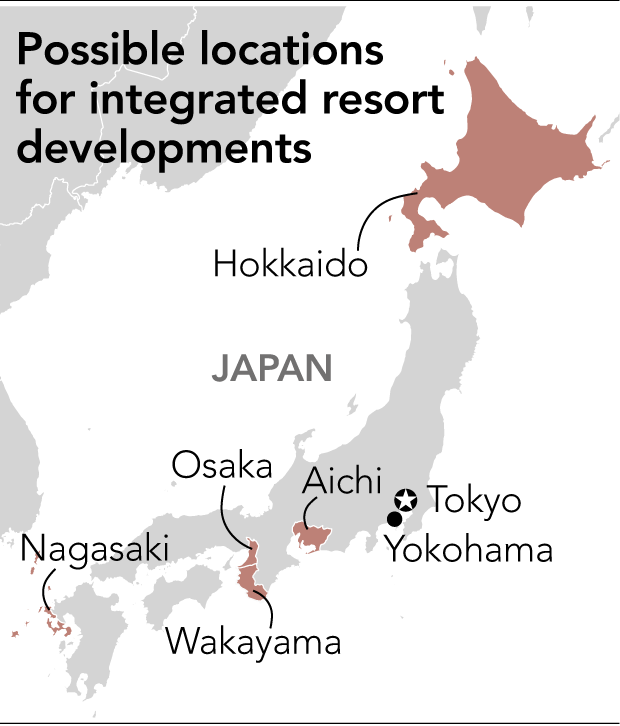 “Our investment for an integrated resort in Osaka would certainly surpass Marina Bay Sands,” George Tanasijevich, the CEO of the Singaporean casino resort that is considered Asia’s most successful.

Owned by the world’s biggest casino operator, Las Vegas Sands, Marina Bay Sands was built with an investment of $5.6 billion in 2010. In 2017, it contributed to more than 30% of the company’s $4.9 billion pre-tax earnings. Las Vegas Sands Chairman and CEO Sheldon Adelson announced last year that the “investment in Japan could be as much as $10 billion.”

As one of the winners of Singapore’s bidding process, Tanasijevich did not fail to offer a warning to Osaka and other local authorities to “engage with bidders and seek feedback from them.” Analysts consider Las Vegas Sands a favorite to win one of the three gaming licenses in Japan.

Other operators are equally enthusiastic, showcasing the uniqueness of their potential business in Japan.

Ed Bowers, the senior vice president of global development for MGM, which operates the Bellagio resort and the CityCenter development in Las Vegas, emphasized his company’s partnership with Shochiku, a Japanese entertainment company.

“This would allow MGM to provide world-class show business using Japanese content, a condition required by the Japanese government,” said Takashi Kiso, CEO of the International Casino Institute in Tokyo.

MGM has stressed its commitment to partnering with local communities. MGM CEO James Murren, who has been traveling to Japan every two months, told the Nikkei Asian Review in Tokyo at the end of May that he has been in contact with “hundreds of Japanese companies, and a dozen of them have shown interest in working with us.” He said that an “integrated resort in Japan will be definitely designed with [a] Japanese architect, outfitted with Japanese interior designers and artists, and powered by Japanese technology.”

“We would consider moving our headquarters to Japan from Hong Kong if we were chosen as one of the operators in Japan,” Geoffrey Davis, chief financial officer of Melco, audaciously declared at the April event. Operating the City of Dreams, one of the anchor casinos on Macau’s Cotai Strip, Melco has developed what it says are unique security measures to track the entry of individuals, using a gate that requires an ID card and facial recognition, which could appeal to Japanese regulators.

Lawrence Ho, Melco’s CEO, recently told Nikkei that his company has divested most of its investment in a Russian casino resort to “clean” up its record for bidding in Japan.

Casino operators are making bids for the Japanese market a top priority. Genting Singapore, which owns Resorts World Sentosa in Singapore and is part of the Genting group of Malaysia, sold its share of a $1.8 billion South Korean casino project in 2017 to focus on a Japanese project.

According to Global Betting & Gaming Consultants, global casino revenues reached $122 billion in 2017, up 8.8% from the previous year. Revenues in Macau rose for the first time in four years in 2017, but they remain only at nearly 70% of their peak in 2013. Las Vegas has been hit by the saturation of casino facilities and generates only one-third of the gambling revenue of Macau. Casino resorts in Japan could transform the global market. 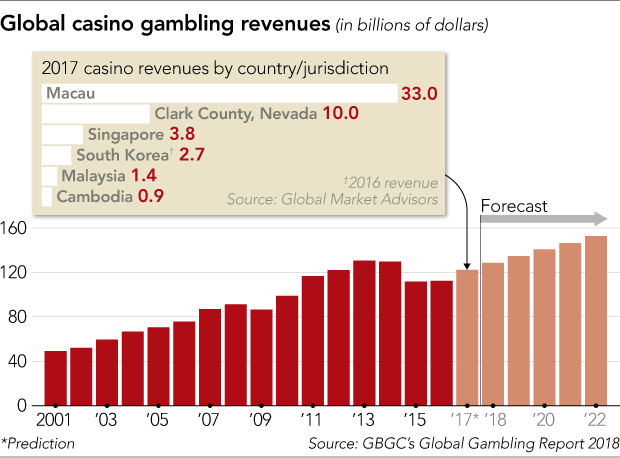 However, apprehension about gambling runs deep in Japan. Nongovernmental organizations as well as civil lobbying groups are strongly opposed to gambling, because of their concern about the pachinko-fueled gaming addiction already present in the country.

“The law legitimizes casinos, defining them as entertainment instead of gambling,” said Tetsuya Yoshida, a lawyer and secretary-general of No Casino Japan Network. “It certainly increases the problem of addiction by encouraging non-pachinko players to gamble.”

Mindful of such concerns, the bill currently under discussion includes measures to address problems stemming from gambling and aims to create an environment for responsible gaming.

“Integrated resorts in Japan will combine the top end of the country’s hospitality and technology,” said Jane Tsai, CEO of gaming consultancy JCT Holdings, at a recent casino industry event in Tokyo, stressing the significance of Japanese resorts. However, analysts at the event, as well as some casino operators, quietly expressed disappointment at a series of draft measures that would restrict Japanese casinos.

Operating licenses, initially, will only be given for three sites in the country. For locals, a 6,000 yen entry levy and a maximum of 10 visits per month will be set. The size of the casino will be limited to 3% or less of the total resort area, with a 30% gaming tax paid to the central and local governments.

Such conditions may impact gaming revenues heavily, because “the casino and gaming revenue is the economic engine that supports the significant nongaming facilities within an integrated resort,” noted Brendan Bussmann, partner and director of government affairs at Global Market Advisors, a gaming and hospitality consulting company.

Despite the uncertainty, operators have highlighted their nongaming content at their pitches, both in Osaka and in Tokyo. “In the Las Vegas model, 60% of the total revenue comes from nongaming content,” said Steven Tight, president of international development at Caesars, hoping to project a family-friendly face.

Chris Gordon, president of Wynn Development, a subsidiary of Las Vegas-based Wynn Resorts, said in an interview: “Initially, Japan might see higher gaming revenues, but with its cultural attractiveness the market will soon after see a higher increase of nongaming revenue.”

“These restrictions are all manageable,” Melco’s Davis told Nikkei. Murren of MGM noted: “Japan should be the capital of meeting and exhibition spaces in Asia, attracting major shows and driving tourism.”

If the legislative process in Japan is completed, with final approval from the upper house by the end of the Diet session, the bidding process for local governments to invite businesses will start in mid-2019, followed by the approval of casino operators. The first integrated resort in Japan is expected to open in 2024.

With high expectations of Asia’s big new market opening a door to casino gambling, operators are staking a great deal of money to fight over the three licenses that are to be granted. However, the long-term prospects for gambling in the Land of the Rising Sun remain unclear. Will the numbers of Japanese customers and wealthy foreign tourists needed to justify the resorts actually materialize?

“Starting a business in Japan is actually the biggest bet of all for the casino operators,” reflected a gaming industry consultant at the Tokyo casino event.