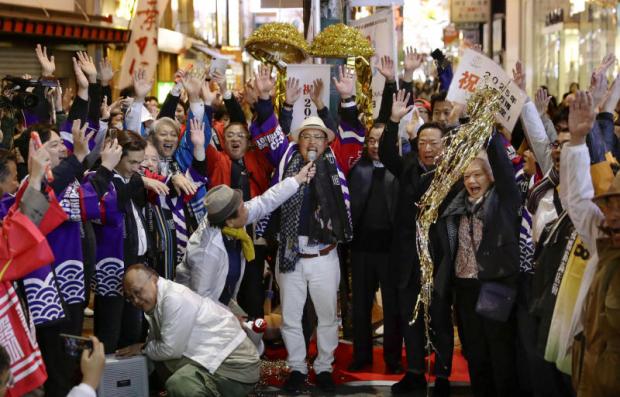 People celebrate winning the bid to host the 2025 World Expo in Osaka after beating Yekaterinburg in Russia and Baku in Azerbaijan in a vote held by the Bureau International des Expositions in Paris on Saturday.

OSAKA: People in Japan, especially those in Osaka and its vicinity, have expressed delight at news the city was picked to host World Expo 2025.

Among people celebrating the decision, which saw Osaka beat Ekaterinburg in Russia and the Azerbaijani capital Baku in voting by the expo’s governing body — the Bureau International des Expositions — in Paris on Friday, were those involved in the western Japanese city’s bid campaign as well as those who attended the World Expo when it was held in Osaka prefecture in 1970.

“This time, I’ll take my time to enjoy the atmosphere,” said 74-year-old Kazuhiro Miyahira, who was in charge of the opening and closing ceremonies of Expo 1970.

Miyahira said on Saturday he was so busy during the event he was only able to go to see the moon rock along with other visitors pouring into the American Pavilion.

He also disagreed with a view that the Japanese public may not be as enthusiastic as before about hosting an expo, saying, “It’s not so different from last time. People changed their attitude about a year before the opening,” adding, “They’ll warm up gradually.”

In Minami, one of the busiest downtown districts in Osaka, local residents and tourists welcomed the news, with some shouting, “Osaka, Osaka.”

Katsuya Ueyama, a 57-year-old head of an association of local shopkeepers, said, “I want visitors to see the appeal of Osaka’s entertainment districts and food culture.”

“I’m extremely happy,” said Shinya Yamanaka, co-winner of the 2012 Nobel Prize in Physiology or Medicine, on Twitter, explaining that his experience of visiting the World Expo in Osaka prefecture around 50 years ago has greatly influenced his career and life as a scientist.

“I hope the young generation who will decide our future will have a similar experience at the World Exposition in 2025,” said Yamanaka, who serves as director of the Centre for iPS Cell Research and Application at Kyoto University. He supported Osaka’s bid to host the 2025 exposition as a special ambassador.

Expo 2025 will be held with focus on designing a future society with the help of health and medical technologies, and a number of research institutes specialising in life science, such as the RIKEN Centre for Biosystems Dynamics Research in Kobe and Yamanaka’s research institute in Kyoto, are located in the Kansai region centering on Osaka.

A new international hub for regenerative medicine utilising artificial intelligence and internet of things technology is planned to open in Osaka in fiscal 2021.

A group of university students in the western Japan region was involved in the campaign to host the World Expo 2025.

“In the beginning, nobody was interested in the World Expo, but we worked together,” said 24-year-old Yuki Kiyomoto, a student at Osaka University.

Osaka will also host the Group of 20 summit next June, welcoming leaders and delegations from major economies. 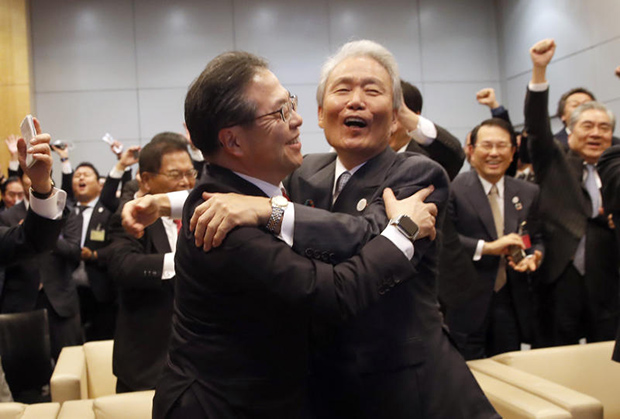 “Osaka would have a bigger presence in Asia in terms of not only tourism but also business,” Matsunaga said.

However, some people have not been as enthusiastic about the upcoming expo. Koichi Maeda, who was in charge of overseas publicity for Expo 1970, said it may be more difficult to stage the event nowadays.

“The time is different from 1970 when foreign cultures still looked fresh (to visitors),” the 88-year-old said. “I hope they can manage it by figuring out a good way to stage the exhibits.”

“We already see some problems such as manners,” said a 71-year-old man who runs a business in Higashiosaka, referring to increasing foreign visitors. “It’s necessary to take proper measures and develop a desirable condition to accept visitors ahead of the opening of the expo.”

Meanwhile, officials in the tourism, retail and construction industries expressed expectations the event will bring more foreign travellers and development projects to the area, helping the economy.

“We’d like to build a scheme that will encourage visitors to the expo to travel a wide area of Kansai,” a JTB Corp official said.

“We’re strongly hoping that opening of the expo will revitalise tourism demand,” an official of Prince Hotels Inc said.

“I hope (the expo) will lead to a revitalisation of all of Japan and not just the Kansai region,” said Takeo Higuchi, chairman and CEO of Daiwa House Industry Co.

Osaka mayor Hirofumi Yoshimura said on Sunday he will propose to the city assembly a supplementary budget worth 14 billion yen (4 billion baht) to prepare for the event.

The mayor said the extra budget will be used to set up infrastructure on the site for the 2025 expo, the man-made island of Yumeshima in Osaka Bay.

Osaka orefecture plans to establish an organisation to prepare to host its second World Expo following the first one in 1970.

“We want to discuss setting up an organisation with the central government and the business community”, Osaka governor Ichiro Matsui said.

Chief cabinet secretary Yoshihide Suga said in a speech in Tokyo that he expects “a large impact” on the local economy from the event.

Japan is expecting 28 million visitors to the expo, to be held between May 3 and Nov 3, 2025, and estimates that the event will help boost the local economy by 2 trillion yen.

The next expo will take place in Dubai, the United Arab Emirates, in 2020, while the most recent one was held in Milan, Italy, in 2015.

It’s time for casino bid, after Osaka wins World Expo 2025
The front-runner of Casino industry is excited about Osaka’s victory